Tiffany Brown is not only one of the most fun people I know but also a great writer and a wealth of pop culture knowledge. You can find her wonderful thoughts and articles on her blog, AngelizedFirst.com and on TVAfterDarkOnline.com. Be sure to follow her on twitter and read her answers to my random questions below!!

Tumblr. Yes or no?

Yes, I have a Tumblr, but I haven’t been posting to it much lately. It’s angelized1st.tumblr.com. When I do post it’s usually pics of my favorite shows. Sometimes I also post quotes and videos, or music. If I’m watching a favorite film, I’ll spam Tumblr with gifs of the movie I’m watching. I also have an Ian Somerhalder Tumblr from years ago at itaintpianolessonshoney.tumblr.com.

The movie you can recite the most lines from?

I’m not sure what movie I can recite the MOST lines from, but anyone who follows my Twitter knows I’m always reciting Buffy, Clueless, Anchorman, and Coming to America.

My favorite musical instrument is the violin, because I played violin for 5 years. I still occasionally play, but not consistently to be as good as I was.

Last movie you saw in the theater and did you like it?

The last movie I saw was Iron Man 3. I loved it so much that I went twice over the weekend. Even though I thought the central could have been better, the action sequences and character development made up for it. If you go, I’d recommend seeing it in 3D. Awesome!

Hmm…. My favorite ride is the roller coaster, but going to the arcade is one of my favorite things to do. Not the kiddie arcade, though. I like the nice ones with a full bar, and all of the games. Maybe even a speedway. But if I have to choose, I’ll go with roller coaster. There’s no greater thrill than flying through the air at break neck speed.

Red. I’m a summer baby, so I really like bright colors, but red makes me feel alive. It lifts my mood, and can be sexy and dangerous. It’s also a classic color that never goes out of style. As much as I love it, though, I rarely wear it all over. I usually use it as an accent piece.

This changes depending on what I’m currently reading. Pride and Prejudice, The Lovely Bones, The Kite Runner, Hunger Games… Game of Thrones made me throw the book across the room. As did A Storm of Swords…. I’m currently reading The Dune Chronicles, and that’s pretty good. Very deep, and thought provoking. Probably one of the most complicated books I’ve read since 1984. LOL, this is hard…

Do you read fanfic?

I’ve tried, but I find it difficult to read off my computer for long periods of time. I tend to get dry eye, because I forget to blink. Besides, I hate waiting for the authors to finish a story. Besides, some of it is just too bloody awful.

Person you’d most like to have dinner with tonight?

LOL, well if anyone follows my Twitter they know it’d most likely be Matt Davis. I just find him interesting. I think it would be fun to pick his brains on various topics. I also would love to have dinner with the President, so I could talk to him about the state of the education system in our country. Hmm… Also the cast and crew of Scandal. They seem like a fun bunch. Maybe I could get some season 3 scoop from Shonda. 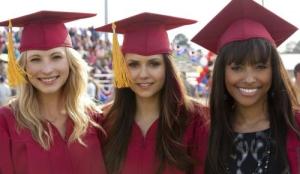 I’ve been pretty excited about this finale. Season 4 has had its ups and downs but last week’s episode was especially exciting and emotional. How much longer are we going to have our return guests? Can we keep the ones we love and send back the ones we don’t? (Goodbye Alexander. Hello Lexi FOREVER.)  More importantly, is Bonnie really dead? REALLY?

Well. THAT was a surprise ending if ever there was one. And I am not quite sure how I feel about it, to be honest. I do, however, love that this finale really slowed things down for the most part, just enough for us to be able to savor each moment. Because there were a lot of incredible and emotional moments. It also set up some really great stuff for Season 5. Will anyone figure out that it’s not really Stefan? How will Katherine fare as a human? Will Delena last? How quickly will Tyler return? And, of course, the most important question: will Matt and Rebekah invite everyone to their wedding in Italy? When we meet again in the fall, it will be double the vampires, double the fun. It’s gonna be a long summer. Which means you have plenty of time to tell me what you loved about the TVD Season 4 finale. Go nuts!

‘The Vampire Diaries’ Recap: The Killer 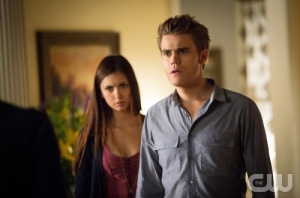 Happy TVD Thursday! So many things to worry about. We received some warnings about sadness and blood. So, basically just another Thursday, right? My sister is visiting from Colorado and I am excited to get to watch the episode with her. My husband is taking bets on whether or not Bonnie will bleed from the nose and demanding that we take a shot for every scene at a party. Are we getting wasted this week?

KATHERINE??? I really hope that is not a hallucination. So ready to have that girl back. I am loving the hunter mythology and all that it entails. Cannot wait to see what Connor has left behind for both of the Gilberts. And I am looking forward to the brothers working closely together to help each other and the woman they love. What did you guys think?

‘The Vampire Diaries’ Recap: The Five 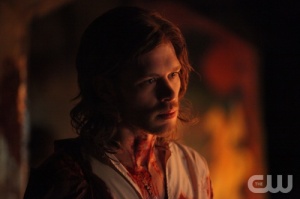 My most sincere apologies for missing last week’s recap. “The Rager” was all that and a bag of my favorite chips.  But, Halloween starts early in Salem. Starts early and rocks HARD. That’s just how the witches roll. Ask Bonnie. Or don’t, she was not invited. Oops.

This week, we get to go on a little trip, take a little walk down memory lane and maybe see some blood? Here’s hoping. Let’s DO THIS.

That episode was full of awesome. I do not even know where to start. I have a lot of feelings. And they are all fighting with each other. Can you put feelings in playpens? Or are chains & closets the way to go? I don’t even know anymore. Can you guys help me? What did you think? 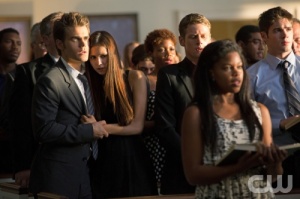 Happy TVD Thursday! I have to admit, all of the journalists’ tweets about this episode have been making me nervous. My body has a fight or flight response to being told I will need tissues. And, since it’s The Vampire Diaries, I am going to do my best to fight through the pain and terror.  Y’all with me?

I’m sorry that I don’t have a lot of snark and jokes for you guys tonight. Honestly, I just wish all of you could come over and give me a hug and drink wine with me. And we could talk about how much we love this show and how much we, too have lost. We could stay up all night, laughing and comforting each other. It would be so great.

Until next week friends. I’ll probably still be crying.

**Afterthoughts now that I can breathe**

Okay. now back to crying. 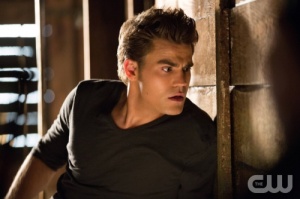 HAPPY TVD THURSDAY FOR THE FIRST TIME THIS DECADE!!! That’s how it feels anyways. Longest. Hiatus. Ever. And now it’s finally here and I am scared and nervous and excited and FEELING SO MANY FEELINGS. Let’s DO this TVD fam!

Another BALLS OUT season premiere you guys!! This show really doesn’t know the concept of taking it easy. And that is why we LOVE IT. Right? Very excited that it is finally back. Very excited that my Unicorns have bathed and are eating well. VERY excited for next week. It looks sexy! And scary! AND AWESOME. What did you guys think of the season premiere? Doing a little dance with me?

How Is This A Thing?

I am sorry but I need to interrupt this gorgeous Friday afternoon to rant quickly about something stupid.

The Vampire Diaries is great television, its superb acting and writing constantly underrated. And with the Season 4 premiere less than a week away, we have been getting lots of news and goodies about what we have to look forward to.

My friend Vee shared (with disdain), a post from CleverTv.com. The posting is all about what kind of “father/uncle duo” both the characters (Stefan and Damon Salvatore) and the actors (Paul Wesley and Ian Somerhalder) would be if they had children.

WHO THE EFF CARES???

There are literally millions of things to talk about in regards to The Vampire Diaries. Even if you hate it. Of ALL of the topics that could be broached, why was this one even on the list? It’s ridiculous. Even beyond the total skeeve factor.

I want video of how the decision was made to discuss this. I can only imagine:

“So… I’d like to talk about vampires as caretakers of children and connect the actors who play the vampires.”

I really shouldn’t let idiocy like this bother me but COME ON!

WHY IS THIS EVEN A THING???

winestainedlife
Create a free website or blog at WordPress.com.